FOLATE (ALSO KNOWN AS FOLIC ACID OR VITAMIN B9, INCLUDING VARIETIES OF ACTIVATED FOLATE, SUCH AS 5-METHYLTETRAHYDROFOLIC ACID, AND BRAIN-READY DERIVATIONS CALCIUM FOLINATE, AND FOLINIC ACID)

Folate, also known as folic acid or vitamin B9, is one of the eight B-complex vitamins. Folate cannot be manufactured by humans and is obtained exclusively from the diet. Folate is an enzyme cofactor for a wide range of enzymes, including enzymes in DNA and RNA synthesis. Folate also has important roles in DNA methylation, redox metabolism, and blood cell formation. Folate deficiency can present as fatigue, weakness, irritability, lethargy, headache, depression, palpitations, shortness of breath, constipation, frequent illness, mouth sores, and/or megaloblastic anemia. In addition to poor diet, gastrointestinal conditions, pregnancy, and certain genetic variants (SNPs, pronounced as “snips”) can predispose towards folate deficiency. Some of the same genetic variants, which either slow folate activation or transport into brain, have been found to be associated with ASD. Transport of folate into brain can also be slowed due to autoantibodies to the folate transporter. Folate supplementation, generally in the folinate form which can enter brain without transport, improved verbal communication and other aspects of autism in several studies, especially in those children with folate autoantibodies. Beyond ASD, folate is widely prescribed to reduce the risk of birth defects, especially neural tube defects. In addition, folate is often recommended for a multitude of different diseases and situations. The inactivated form of folate that is present in foods and most food supplements must be activated in the body in order to have biological function. Activation is slow in humans, and highly variable between people based on the presence or absence of certain gene SNPs. Very high doses of inactivated folate can result in side effects in people with slowed activation. Side effects are rare at usual doses used in supplementation. 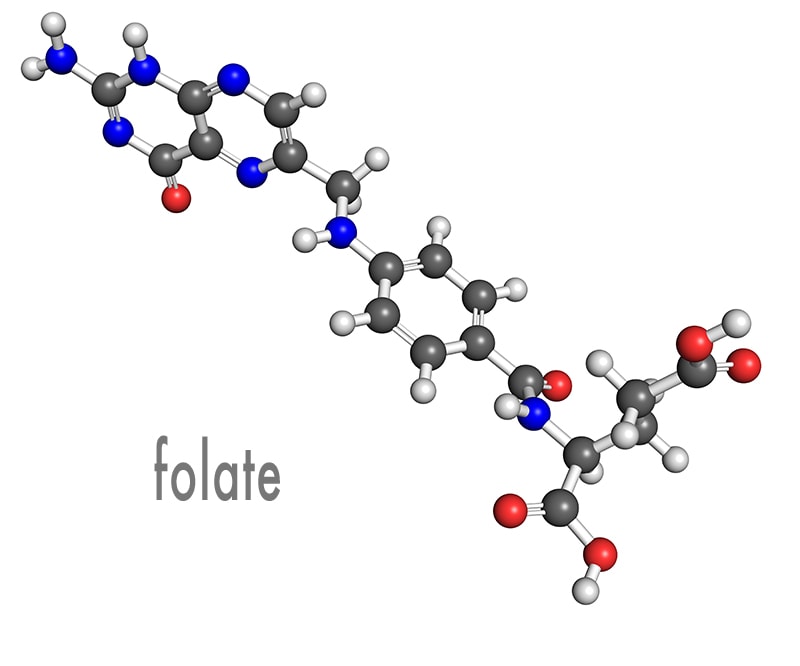 Folate, provided as activated folate (5-methyltetrahydrofolic acid) and folinate, is added in order to provide a wide basis of nutrition, especially given the important role of folate in DNA synthesis, methylation, and energy metabolism, as well as preliminary data regarding its use as a food supplement in ASD. Inactivated folate is not present in Spectrum Needs  Side effects are unexpected with the types of folate and doses used in Spectrum Needs  Folate transporter autoantibodies can be measured in blood. Individuals with severe folate transporter deficiency require higher doses of folinate. You may wish to speak to your physician regarding additional folinate supplementation beyond that provided by Spectrum Needs.

What Is Folate? Folate, also known as folic acid or vitamin B9, is one of the eight B-complex vitamins. Folate cannot be manufactured by humans and is thus a true vitamin, obtained exclusively from the diet.

What Does Folate Do? Folate is an enzyme cofactor, which means that it is a necessary component for enzyme function. Folate is a cofactor in a wide range of enzymes, especially including enzymes in both DNA and RNA synthesis. Folate is also essential for DNA methylation, and thus has a critical role in gene expression (in determining which genes are activated). In addition, folate plays important roles in redox metabolism, and the formation of different types of blood cells.

What Does A Folate Deficiency Appear as? Folate deficiency can present as fatigue, weakness, irritability, lethargy, headache, depression, palpitations, shortness of breath, constipation, frequent illness, mouth sores, premature greying hair, and/or megaloblastic (large red blood cell) anemia. In addition to poor diet, gastrointestinal conditions that affect vitamin absorption can lead to folate deficiency. In addition, some people have genetic variants that hinder the body in activating dietary folate. A developing fetus requires a lot of folate, and deficiency is relatively common during pregnancy.

What About Folate‘s Use in Autistic Spectrum Disorders (ASD)? Common genetic changes in genes in the folate pathway have been found to be associated with ASD (https://www.ncbi.nlm.nih.gov/pubmed/27755291). These genes are involved in activating folate, for example MTHFR and MTRR, and genes involved in transport of folate into brain, including FOLR. Disease associated variants in these genes are frequently single nucleotide polymorphisms, termed as SNPs (pronounced as “snips”), although rare gene variants also likely are important. Transport into brain can also be slowed due to autoantibodies to folate receptor alpha (FRα) (reviewed in https://www.ncbi.nlm.nih.gov/pmc/articles/PMC4910649/pdf/cmped- 10-2016-043.pdf).

Folic acid supplementation may have a role in the treatment of children with autism. In one randomized double-blind study, 12 weeks of high dose (2 mg/kg/day, maximum 50 mg/day) folinate (folinic acid) improved verbal communication as compared with those receiving placebo, with a medium-to-large effect size (https://www.ncbi.nlm.nih.gov/pubmed/27752075). Improvement was greater in those children with folate autoantibodies. Multiple case series have demonstrated that folinate treatment in ASD children with positive “FRα autoantibodies can result in partial improvements in communication, social interaction, attention, and stereotypical behavior to complete recovery of ASD symptoms and other neurological problems such as seizures” (reviewed in https://www.ncbi.nlm.nih.gov/pmc/articles/PMC4910649/pdf/cmped-10- 2016-043.pdf). In an open-label study, folic acid (400 mcg twice daily) intervention “improved autism symptoms towards sociability, cognitive verbal/preverbal, receptive language, and affective expression and communication” and normalized glutathione redox metabolism in autistic children (https://www.ncbi.nlm.nih.gov/pmc/articles/PMC4924178/pdf/nutrients-08- 00337.pdf). There are connections between folate and mitochondria, including that folate is required for energy metabolism. In one study, folate supplementation increased complex I activity in children with mitochondrial disease and autism (https://www.ncbi.nlm.nih.gov/pmc/articles/PMC5332922/).

What Form of Folate is Best? The inactivated form of folate (generally referred to simply as “folate”) is the form supplemented in food and in most food supplement (“vitamin”) products. Folate must be activated by conversion in the liver to various derivatives of tetrahydrofolate by the enzyme dihydrofolate reductase (DHFR) in order to have biological function as an enzyme cofactor. The activity of DHFR is unusually slow in humans compared to in other mammals, with substantial variation in enzymatic activity between different people based on the presence or absence of certain gene variants (including SNPs).

What Are the Common and/or Important Side Effects of Folate? Folate is a water-soluble vitamin and thus considered to be generally non-toxic. However, the “upper tolerable intake” of folate is listed as 1 mg (1,000 mcg) per day in adults, beyond which additional supplementation may lead to the accumulation of (inactivated) folate. The actual intake where supplementation exceeds activation depends greatly on the presence of genetic variants (both common SNPs and rare) in each individual’s DHPR gene. High doses of inactivated folic acid might cause abdominal cramps, diarrhea, nausea, rash, sleep disorders, irritability, confusion, excitability, and other side effects.

In addition, a main argument against widespread high levels of folate supplementation in bread and other foods is that high folate levels can mask a vitamin B12 deficiency, and thus is recommended that vitamin B12 should be supplemented along with folate.

Is There Any Laboratory Testing for Folate Deficiency? Laboratory testing can reveal the presence of a deficiency of this nutrient, but is generally not likely to have clinically utility. Folate transporter (FRα) autoantibodies can be measured in blood. Brain folate deficiency can be determined by cerebrospinal fluid measurement of activated folate, but this test requires a spinal tap.

Robust amounts of both activated folate and folinate are provided by Spectrum Needs.  However, individuals with severe folate transporter deficiency, including those with folate transporter (FRα) autoantibodies, require higher doses of folinate, and higher doses are recommended in ASD in general by some experts. You may wish to speak to your physician regarding additional folinate supplementation beyond that provided by Spectrum Needs.

How and Why is Folate (B9) Used in Spectrum Needs