GABA is the main inhibitory neurotransmitter in the central nervous system. GABA reduces neuronal excitability throughout the nervous system. Used as a dietary supplement, GABA has a calming effect. GABA has been reported to relieve anxiety and improve mood. GABA is also used in pain disorders such as migraine, motion sickness, and hyper-excitatory conditions, including ADHD and PMS. GABA is often supplemented for potential effects on beta (insulin producing) cells, including promoting improving exercise tolerance, decreasing body fat, and increasing lean body weight. Side effects are rare at usual doses used in supplementation.

What Is GABA? GABA is an acronym for gamma-aminobutyric acid, an amino acid that is not part of proteins. Up to a third of brain synapses employ GABA, which is the main inhibitory neurotransmitter in the central nervous system. GABA is manufactured in humans, and thus is not a vitamin. GABA synthesis in humans requires with pyridoxal phosphate (PLP, the active form of vitamin B6) as a cofactor.

What Does GABA Do? As an inhibitory neurotransmitter, GABA reduces neuronal excitability throughout the nervous system. GABA is often used as a dietary supplement, whereas it has a calming effect. GABA is also found in other body systems, including the gut, liver, kidneys, reproductive tissues, and immune cells. Of importance, GABA is present in the pancreatic beta cells that produce insulin.

What Does a GABA Deficiency Appear as? GABA is made by our bodies and dietary deficiency does not exist.

What About GABA’s Use in Disease? As GABA is the chief inhibitory neurotransmitter, drugs that increase GABA’s effects are highly effective for hyper-excitable states, including anxiety, insomnia, migraine, seizures, and pain. However, many of these drugs are highly dangerous and addictive, including the barbiturates (phenobarbital) and benzodiazepines (e.g. lorazepam, diazepam). Thus, there is an interest in using GABA itself, a natural compound present in foods, as a dietary supplement. GABA supplementation often has a calming effect, and is generally used as such. GABA has been reported to relieve anxiety, improve mood, and reducing symptoms of some hyper-excitatory conditions. Among the latter, include attention deficit-hyperactivity disorder (ADHD), premenstrual syndrome (PMS), and pain disorders such as migraine. GABA is also sometimes used for high blood pressure and motion sickness. Additionally, GABA is often supplemented for potential effects on beta (insulin producing) cells, including promoting improving exercise tolerance, decreasing body fat, and increasing lean body weight.

What Are the Common and/or Important Side Effects of GABA? GABA is water-soluble and considered to be generally non-toxic. Some sources list potential side effects as nausea, headache, sleepiness, and muscle weakness. However, side effects are rare at usual doses used in supplementation.

Is There Any Laboratory Testing for GABA Deficiency? Laboratory testing is not likely to be of clinical utility other than in screening for a few rare metabolic/mitochondrial disorders in which GABA levels are highly elevated.

Why is GABA Used in CalmNeeds®

GABA is added to CalmNeeds® for its calming, anti-anxiety effects. 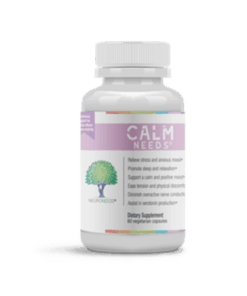