The “functional disorders” comprise a group of related conditions that involve combinations of vague and/or nonspecific “functional” symptoms, including pain, fatigue, nausea, or vertigo/dizziness, as well as many other symptoms. Common functional disorders include migraine, irritable bowel, major depression, generalized anxiety, tinnitus, and POTS. Often-severe functional disorders include cyclic vomiting syndrome (CVS), myalgic encephalomyelitis/chronic fatigue syndrome (ME/CFS), fibromyalgia, and complex regional pain syndrome (CRPS). The term “functional” refers to the source of disease being the abnormal function of cells, tissues, and organs, and not an abnormal structure. If your intestines back up because there is a physical blockade of the bowel, this is a structural problem. Examples include blockage from foreign bodies, malrotation, and tumors. However, if your intestines back up because the muscles of the bowel are not moving correctly, this is a functional problem. Examples include post-surgical ileus and severe constipation from irritable bowel.

Functional symptoms are subjective, experienced by the individual and thus “real”, but rarely showing objective signs clear to others. In addition, standard laboratory tests are generally negative, although subtle signs leading to the underlying biological cause(s) may be unrecognized. Thus, diagnosis is difficult, often inaccurate, and generally delayed. Unfortunately, many of these people are thought of as having “non-organic” or “not real” disease, diagnosed with primary mental health conditions (e.g. somatization, conversion), and even labeled as fictitious (e.g. Munchausen, medical child abuse) or drug seekers. 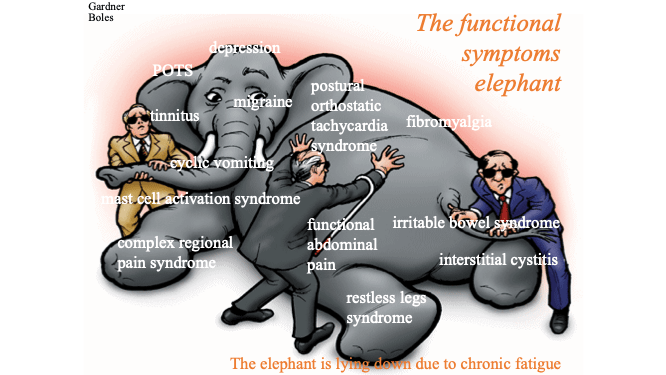 Functional disorders have high degrees of co-morbidity (overlap), in that it is common for an individual to be affected with a few or several of these conditions. Functional disorders also have a substantial genetic component, in that close relatives are at substantially higher risk for having one or more of these conditions. It is not uncommon for families to have several affected members suffering from different, and often multiple, functional disorders. Since different functional disorders affect different parts of the body that are the purview of different medical specialties, the same patient can be referred to many physicians, and receive many “diagnoses”. For example, an ENT might diagnose the same person with tinnitus (ear ringing), a cardiologist POTS, and a GI irritable bowel (see the Figure, and imagine the blind men as those specialists).

Functional disorders are very common and one of the most frequent causes of disability in people throughout the USA and world. In particular, chronic pain disorders and chronic fatigue syndrome are common and highly disabling. These disorders can also be fatal, by increasing the risk for drug addiction and overdose.

Given that functional symptoms involve how one feels, and can involve essentially any part of the body, it is not surprising that the cause appears to involve the function of nerve cells. Nerve cells (neurons) are electrical and have very high energy requirements. Thus, energy metabolism is extremely important for proper neuronal function. The vast majority of the energy used by all cells is produced by its mitochondria. In recent decades, mitochondrial dysfunction has been identified as an important component in the cause of functional disorders. In particular, migraine, cyclic vomiting, chronic fatigue syndrome, and depression each have multiple studies revealing an association with abnormal energy metabolism (mitochondrial dysfunction), although some evidence exists for such a connection of mitochondria with multiple other functional syndromes as well. There are other aspects of cellular function also associated with functional disorders, including ion channels, neurotransmission, and inflammation. However, energy metabolism appears to be common, important, and treatable in many sufferers.

Dr. Boles, one of the founders of NeuroNeeds® and the main developer of its products, has been treating functional disorders for over 25 years with nutrients aimed at optimizing mitochondrial energy metabolism. These nutrients are often referred to as the “mitochondrial cocktail” and include vitamins (e.g. several B vitamins, C, D, E), minerals (e.g. magnesium, zinc, selenium), antioxidants (e.g. coenzyme Q10, alpha lipoic acid), and other compounds (e.g. carnitine, creatine, arginine). While this treatment is generally successful, oftentimes greatly so, it was very difficult as multiple nutrients are critical for mitochondrial function. Additionally, most over-the-counter products are of insufficient dosage or bioavailability for several of these nutrients in order to significantly affect mitochondrial function. NeuroNeeds® has made mitochondrial therapy easy, with the addition of SpectrumNeeds® (33 active ingredients in a powder form), EnergyNeeds® (40 active ingredients in a capsule form), and QNeeds® (gel capsules containing a very-highly bioavailable form of coenzyme Q10).

There are multiple parallels between the functional, neurodevelopmental, and mood disorders. These concepts overlap greatly in that people are likely to have conditions listed in two or all three of these categories, as well as to have relatives with conditions in different categories. All three categories have several genetic risks factors in common, and oftentimes have underlying mitochondrial dysfunction. For example, migraine, epilepsy, and depression can appear together, and all three might respond favorably to mitochondrial cocktail. 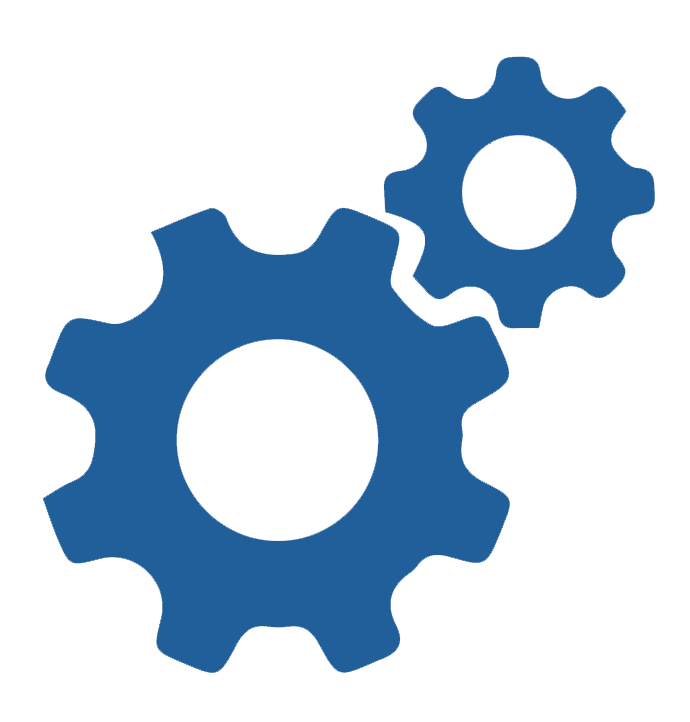 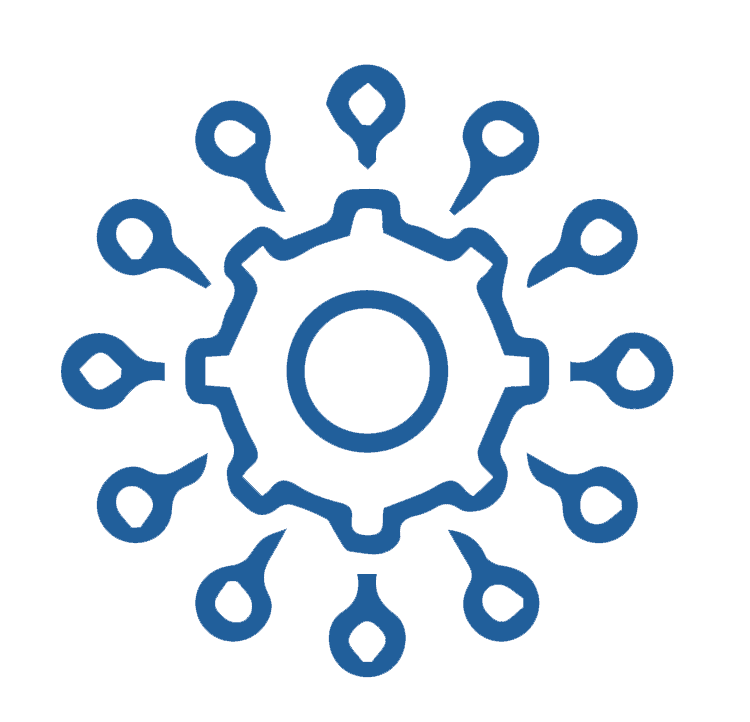 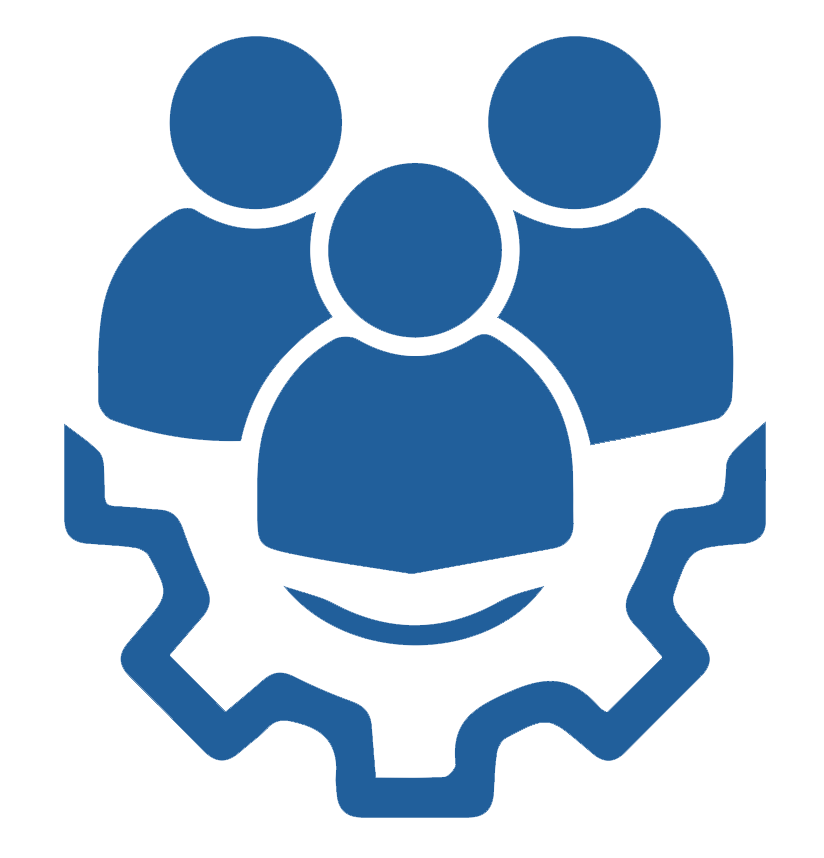