Phospholipids refers to a special category of fats, which are critical components to cell membranes and important in a wide variety of processes in the brain as well as throughout the body. Specific phospholipids with important functions in brain include phosphatidylcholine (PC), and phosphatidylserine (PS). Omega-3 fatty acids (DHA and EPA) can only enter brain in appreciable levels if they are complexed into phospholipids, and thus phospholipid sources of omega-3s, including krill oil, are preferred for brain health. PC and PS are frequently recommended as supplements for a variety of brain disorders including memory loss, Alzheimer, cognitive dysfunction, anxiety, and depression. In particular, these phospholipids are often recommended in people with ADHD. Side effects are rare and not expected at the doses present in OmegaNeeds®.

What Are Phospholipids? Phospholipids refers to a special category of fat bound to phosphate. Usually, the phosphate is compounded with choline, serine, inositol, or ethanolamine, and these fats are referred to as phosphatidylcholine (PC), phosphatidylserine (PS), phosphatidylinositol, and phosphatidylethanolamine. Phospholipids are critical in many processes, including in mitochondrial energy metabolism, and in many other aspects of health, especially in the brain and heart.

What Do Phospholipids Do? Phospholipids are important in a wide variety of processes in the brain as well as throughout the body.

Phospholipids are of special concern in omega-3 supplementation because most omega-3 fatty acids (e.g., DHA and EPA) that enter the brain are complexed into phospholipids. In fact, omega-3 intake into brain is highly dependent on being part of a phospholipid.

Most of the DHA enters the brain by way of a protein called MFSD2A [PMID: 24828044]. This protein is expressed exclusively on the endothelium of the blood-brain barrier, whereas it is found at high concentration. The blood-brain barrier consists of the cells lining the blood vessels within the brain, which fit tightly together limiting transport into brain to protect this vital organ. Mice lacking MFSD2A have markedly reduced levels of DHA in brain and loss of neurons (nerve cells) in important brain areas such as the hippocampus and cerebellum. These mice have cognitive deficits (mental retardation), severe anxiety, and small heads. Humans born with genetic mutations in MFSD2A have cognitive deficits, small heads, spasticity, seizures, and early death [PMID: 26005865, PMID: 26005868]. Brain imaging usually shows abnormalities related to a loss of neurons, and cellular studies showed much reduced DHA transport rates [PMID: 26005868]. Additionally, knockout mice in which the MFSD2A gene is non-functional have 50% lower brain DHA levels when compared to littermates without the gene mutation, attributed to significantly reduced brain DHA uptake [PMID: 24828044].

Studies demonstrate that over 80% of DHA in the body is in the form of phospholipids [PMID: 24036166]. MFSD2A transports DHA into brain only if esterified in phospholipid, in particular phosphatidylcholine (PC), but also phosphatidylserine (PS) and phosphatidylethanolamine. However, MFSD2A transports very little DHA into brain if in the form of triglycerides (another kind of fat) or unesterified (by itself, free fatty acids) [PMID: 24828044]. Omega-3 fatty acids, including DHA, are naturally contained in phospholipids (mostly PC) in products derived from krill. Thus, krill-based products have a substantial advantage in terms of promoting brain uptake of DHA. In contrast, brain DHA uptake is more difficult when present in triglycerides, as is the case with products derived from fish. Blood DHA levels must be highly elevated to facilitate brain uptake from passive diffusion in the case of fish intake or fish oil supplementation.

EPA complexed in PC (PC-EPA, which naturally is at high concentration in krill oil) was shown to increase brain EPA levels over 100-fold, while free EPA had little effect. “Furthermore, LPC-EPA, but not free EPA, increased brain DHA 2-fold” [PMID: 30530735].

What Does a Phospholipids Deficiency Appear As? Phospholipids are made by our bodies, and deficiency states are not known. However, some of the components that make specific phospholipids must come from the diet, especially omega-3 fatty acids and choline. Krill oil contains high amounts of phosphatidylcholine (PC), and thus is an excellent source of choline, which is an essential nutrient. [Choline is sometimes called vitamin B4, but is rarely present in commercial vitamin supplements.]

What About Phospholipid’s Use in Disease?  Phospholipids are supplemented to facilitate the uptake of omega-3 fatty acids into brain (see above). Among many different disease states, the phospholipids PC and PS are often recommended in people with ADHD.

Phosphatidylcholine (PC) is often called lecithin since it is an important component thereof. Among many other uses, PC is needed to make acetylcholine, which is an important neurotransmitter in the brain and peripheral nervous system. PC is sometimes recommended to treat a variety of neurological disorders including, memory loss, Alzheimer, cognitive dysfunction, anxiety, depression, and movement disorders. Phosphatidylcholine is also sometimes recommended for treating disorders of the skin, liver, kidney, circulation, autoimmunity, and immunity. Some specific uses including the treatment of high cholesterol, premenstrual syndrome (PMS), inflammatory bowel disease, and aging. Most of the omega-3 fatty acids in krill are complexed in PC, so krill oil, and OmegaNeeds®, are an excellent source of PC.

Phosphatidylserine (PS) is a critical component of all cell membranes, including nerve cell membranes. Like PC, PS is sometimes recommended to treat many neurological disorders, including memory loss, Alzheimer, stress, anxiety, depression, and ADHD. It is sometimes used as a nootropic (“smart drug”, to boost brain performance) as well as to improve athletic performance. PS is added to OmegaNeeds® in large part due to its likely positive effects on ADHD. One double-blind placebo-controlled study (PMID: 23495677) revealed that “PS significantly improved ADHD symptoms and short-term auditory memory in children.” Another blinded controlled study (PMID: 21807480) noted a reduction in ADHD-related symptoms on PS-omega-3s. A recent meta-analysis (careful review of other studies, PMID: 33539192) of four randomized clinical trials revealed a statistically significant effect of PS on symptoms of inattention.

What Are the Common and/or Important Side Effects of Phospholipids? Side effects are rare at usual doses used in supplementation. 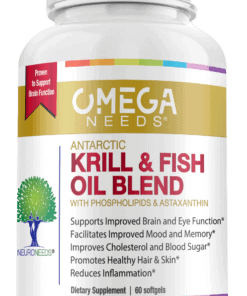 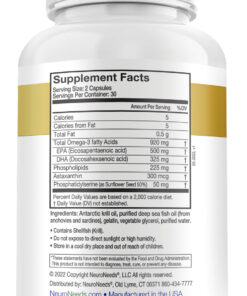